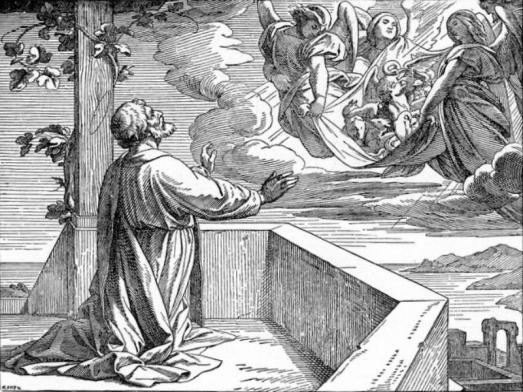 Here are the references for the readings.  Please look these up in your print Bible, your smartphone app Bible, or your online Bible:

As long as I can remember I have had Jewish friends and relatives.  Here are a few examples:

*As a little boy our neighbors across the street were Jewish.

*For many years now one of my best friends in the world has been married to a Jewish man.

*I had a number of friends and acquaintances in college who were Jewish.

*One of my closest workmates at KUHT, channel 8 in Houston, was a Jewish woman about my age.

*Most prominent among my Jewish associates has been my Aunt Karen and Uncle Jerry, and their family.

We never made a big deal about our close relatives being Jewish.  My parents taught me to respect them and to love them.  One small thing I would note was at mealtimes.  Whenever my aunt and uncle were visiting my mother would make sure there were appropriate choices with respect to a moderate version of a Kosher diet for our relatives at meals.  Sometime this would simply include two kinds of meat for a large family dinner.  I remember one Christmas dinner when they were at our home.  The meal would typically have ham.  My mother also prepared a turkey.  I gently observed my uncle quietly pass on helping himself to the ham.  Had I not been watching at that moment I would not have seen it happen at all.  Everybody had plenty to eat, so it was not an issue.  My aunt and uncle have always been gentle and courteous in all interactions, and we treated them likewise. These various interactions with my beloved aunt and uncle and cousins gave me an introduction to the dietary rules of Judaism.

In our readings from Acts on both days for this devotion we have a discussion among the church leaders regarding allowing non-Jews, or Gentiles, into the body of believers.  The conclusion is that yes, Gentiles can become Christians.  In the overall view of the New Testament it is concluded that Gentiles do not have to become Jews first, and then become Christians.  This is a prominent part of the teachings in the book of Galatians.

In our readings God uses a vision given to St. Peter regarding Kosher and non-Kosher food to make this point.  Here is how St. Peter explained the vision:  ““I was in the city of Joppa praying, and in a trance I saw a vision. There was something like a large sheet coming down from heaven, being lowered by its four corners; and it came close to me. 6 As I looked at it closely I saw four-footed animals, beasts of prey, reptiles, and birds of the air. 7 I also heard a voice saying to me, ‘Get up, Peter; kill and eat.’ 8 But I replied, ‘By no means, Lord; for nothing profane or unclean has ever entered my mouth.’ 9 But a second time the voice answered from heaven, ‘What God has made clean, you must not call profane.’ 10 This happened three times; then everything was pulled up again to heaven. 11 At that very moment three men, sent to me from Caesarea, arrived at the house where we were. 12 The Spirit told me to go with them and not to make a distinction between them and us. These six brothers also accompanied me, and we entered the man’s house.” Acts 11:5-12.

The point here is not just about Kosher food and non-Kosher food.  This revelation does allow Christians to eat a non-Kosher died.  In this context, though, it is also about God’s abundant grace and his will to include people of all backgrounds in the Body of Christ.  The Lord tells St. Peter, “What God has made clean, you must not call profane.”  This is a powerful statement about what God does for us in Jesus. By God’s merciful goodness and the forgiveness of our sin, people are made and announced as clean.  God’s Word is powerful and good. It supersedes our opinions and prejudices. All people are invited to be followers of Jesus, no matter what we humans say about it.

This was a change for many in the church.  This started as a group of Jewish people who followed a Jewish teacher.  His life and ministry were all about fulfilling the prophetic Word in the Hebrew Bible of the Jews.  For those who paid attention to what Jesus said, this was not a new idea, for he said his message both for the Jews and the world.  For those who had diligently studied the Old Testament, this was not new idea, for the prophets told of God’s will to include the Gentiles, or the “Nations,” in his saving work.  Ultimately, we understand this vision given to St. Peter to be the continuation of God’s plan for bringing the Good News to the whole of humanity.  This Good News is for you as well, no matter what your background may be, Jew or Gentile.

A prayer of Catherine of Siena

Power of the eternal Father, help me. Wisdom of the Son, enlighten the eye of my understanding. Tender mercy of the Holy Spirit, unite my heart to yourself. Eternal God, restore health to the sick and life to the dead. Give us a voice, your own voice, to cry out to you for mercy for the world. You, light, give us light. You, wisdom, give us wisdom. You, supreme strength, strengthen us.