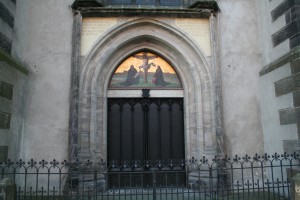 Photo above – The Commemorative Bronze Doors at the Castle Church in Wittenberg, Germany.

Photo below – The Castle Church in Wittenberg, Germany.

Martin Luther posted his 95 Theses on the Castle Church door on October 31, 1517 in Wittenberg, Germany. This action was meant to stir up discussion among those who read the 95 Theses. He posted these at the Castle Church door on this date because the local ruler, Frederick the Wise, was hosting a festival of relics starting November 1 (All Saints Day). The charge for admission to the festival of relics was the purchase of Indulgences of various values. The selling of indulgences was, in part, to raise the large sum necessary to build Saint Peter’s Basilica at the Vatican. An indulgence would grant the purchaser a reduction of his or her time in purgatory.

Roland Bainton wrote a biography of Martin Luther entitled “Here I Stand”.  In this he made note of the major themes of Luther’s 95 Theses.
Which Theses are associated with what Theme?

Some of the theses may apply to more than one of Bainton’s points.
Here are Bainton’s Points, and the number of each thesis associated with that point:
1) Objection to the Avowed Object of the Expenditure – Opposition to the financing of the building of Saint Peter’s Basilica at the Vatican
50, 51, 59, 66, 70, 86

Below are all 95 of Martin Luther’s 95 Theses. These are in the form of a more modern translation from the original Latin.

Out of love and concern for the truth, and with the object of eliciting it, the following heads will be the subject of a public discussion at Wittenberg under the presidency of the reverend father, Martin Luther, Augustinian, Master of Arts and Sacred Theology, and duly appointed Lecturer on these subjects in that place. He requests that whoever cannot be present personally to debate the matter orally will do so in absence in writing.